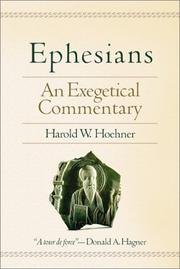 Today in my Adult Bible study class at Meadowlands Baptist Church we discussed these verses in Ephesians 4:

Ephesians 4:4-6 There is one body and one Spirit, just as you were called in one hope of your calling; one Lord, one faith, one baptism; one God and Father of all, who is above all, and through all, and in you all. (NKJV)

I found Hoehner to be helpful in unpacking Paul’s meaning in these verses, so I decided to share his comments on these verses.

First, there is one body (ἓν σῶμα), which refers to the universal church already discussed (1:23; 2:16; 3:5–6). … it is not that Gentiles become Jews, as in the OT, nor Jews become Gentiles, but that unbelieving Jews and Gentiles become one body of believers when they place their faith in the work of Christ at Calvary. They are no longer two entities but one.

Second, there is the one Spirit (ἓν πνεῦμα) referring to the Holy Spirit. …

Third, there is one hope.With this clause Paul breaks from the pattern of verses 4a and 5–6 and refers back to the call mentioned in verse 1. He does this in order to give a conceptual framework on which the rest of the exhortation is based. … The noun ἐλπίς, “hope,” was discussed in 1:18 and was defined as eager expectation of the outworking of God’s plan. The hope presented in Ephesians is the reality that all things will be headed up in Christ (1:9) and though the believers are presently seated with Christ, in the future they will be displayed in heaven as trophies of his grace (2:7). Further, they have been brought near to God, united into one body in Christ and reconciled to God (2:11–3:13). Before this they were without hope and without God in the world (2:12). Hence, there is the element of objective hope which is laid up for the believers (cf. Col 1:5; Rom 8:24), and this serves as the basis of the subjective hope. Hope for believers is not the world’s “hope so” but the absolute certainty that God will deliver what he has promised.

In conclusion, then, the elements of unity are portrayed in the one body, the one Spirit, and the one hope of their calling. The third person of the Trinity is the unifier in this verse.

4:5. Fourth, there is one Lord. In the previous verse the third person of the Trinity was discussed, Paul now considers the second person, Christ. The word κύριος logically refers to Christ since Paul has just discussed the Holy Spirit in verse 4 and will discuss the Father in the next verse. Christ is the “one Lord” who provided redemption (1:7), hope (1:12), and headship over the church (1:22–23).

Fifth, there is one faith. The “one faith” does not have reference to an objective faith, the body of truth believed by Christians … as some propose, but rather to the subjective faith which is exercised by all Christians in Christ their Lord (cf. Col 2:7). … In the first chapter of this book, Paul mentions that the Ephesians had expressed their faith when they heard the message (1:13) and that their faith in the Lord Jesus was widely known (1:15). Thus, it is the one faith in the one Lord.

Sixth, there is one baptism. This phrase has caused some debate. There are two major views and a third should be considered. First, most commentators think it has reference to water baptism. … Second, some consider it to be a reference to the Spirit’s baptism. … A third option that needs to be considered is that it refers metaphorically to the believer’s baptism into Christ’s death, speaking of the believer’s union with Christ in his death and resurrection. … This same concept is seen in other NT passages (Rom 6:1–11; Gal. 3:27; Col 2:12). Furthermore, it fits well with the context, for the believer’s baptism into Christ signifies union with Christ (Rom 6:5) and it occurs at the time of conversion (Rom 6:2–4). This inward reality is all too often missed. It serves as the basis of the outward ritual. Hence, the “one baptism” most likely refers to the internal reality of having been baptized into (identified with) the “one Lord” by means of the “one faith” mentioned in this verse.

In conclusion, there is unity in the one Lord in whom believers place their one faith expressed in one baptism signifying their identification in his death and resurrection. This verse revolves around the second person of the Trinity.

4:6. “one God and Father of all.” This is the third triad and it speaks of God the Father. This marks the climax, for God is the one unifying factor in both testaments, in spite of the fact that many gods are honored in the world. … God is further described as the God and Father “of all,” which refers not to all humans but to all believers (John 1:12; Gal 3:26). This is substantiated in the present context because Paul is exhorting Christians, and not all humans, to preserve the unity.

Regarding the further identification of God, there are three parts. First, he is over (ἐπί) all, indicating his sovereign position over all believers. … Second, not only is God sovereign in all believers’ lives, he also works through (δία) all of them. Here the emphasis is on God’s immanence. … Finally, God is in all believers (ἐν πᾶσιν̓ ἡμῖν). This signifies the indwelling Spirit …, his intimate presence.1

No related posts. Guess I should write some, eh?