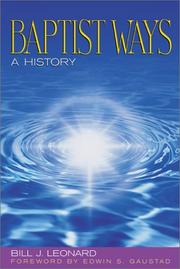 Available for purchase from:

Conceived as a replacement for Robert Torbet’s well-known text, A History of the Baptists, this book attempts to survey the worldwide history of Baptists from their origins in seventeeth-century England. Leonard states his thesis clearly in the opening paragraph of his preface:

“The thesis of this book is relatively simple. It suggests that amid certain distinctives, Baptist identity is configured in a variety of ways by groups, subgroups, and individuals who claim the Baptist name. This identity extends across a theological spectrum from Arminian to Calvinist, from conservative to liberal, from open to closed communionist, and from denominationalist to independent.” (xi)

This thesis allows Leonard to include a broad survey of individuals and groups, including giving significant attention to the role of women and minorities in the history of the Baptists. One interesting feature is regular description of Baptist hymnody and worship. Throughout the work, Leonard draws primarily from secondary sources, although the notes (which are placed as endnotes after each chapter) indicate a measured use of primary sources.

The book alternates between chronological and geographical perspectives. Chapter 1 provides a standard introduction to the study of Baptist history, surveying common doctrinal distinctives and contrasting the three views of Baptist origins. Chapters 2–9 proceed chronologically, telling the story of English and American Baptists from their obscure seventeenth-century beginnings to national prominence during the nineteenth-century. Chapters 10–14 survey the Baptist movement elsewhere, giving the book a global scope. For instance, chapter 10 provides a concise summary of Baptists in Canada (227–244), followed by brief sections on Baptist efforts in various Latin American countries. These chapters will be of most interest to readers outside the United States, but are important for all readers to provide a full understanding of the various kinds of Baptists to be found throughout the world. Chapters 15 and 16 resume the story of Baptists in the West during the twentieth century.

Predictably, the book reflects the denominational affiliation of its publisher, Judson Press. As the publishing arm of the American Baptist Churches USA, Judson Press represents a particular constituency of Baptists. The book puts some emphasis on this strain of Baptist identity, tracing the development of the ABCUSA out of the Northern Baptist Convention in some detail in chapter 16.

Unfortunately, the book omits or downplays some important events in Southern Baptist history. For instance, the extensive controversy over the modernism of Crawford H. Toy receives no treatment. Toy, though he was professor at The Southern Baptist Theological Seminary from 1869–1879, is only mentioned as a missionary appointee to Japan who “never went because the [Foreign Mission Board] delayed all appointments in anticipation of the Civil War and related economic difficulties” (353). The dates of his professorship at Southern appear only in an otherwise unremarkable parenthesis, and there is no mention of his broken engagement to missionary Lottie Moon. As other reviewers have noted, the Conservative Resurgence in the SBC also receives scant coverage, appearing only in summary on pages 414–415.

Occasionally, the book suggests that an emphasis on biblical literalism results in erratic or erroneous conclusions. An early example of this pattern occurs in the treatment of John Smyth, the early sixteenth-century Baptist. Smyth was certainly unstable, following a spiritual trajectory that parallels that of Roger Williams in America. Smyth began as an Anglican until he adopted Separatist views. Later, he founded the General Baptists along with Thomas Helwys by baptizing himself and then his own followers. This self-baptism brought criticism, and eventually Smyth repudiated his own baptism and sought admission into a nearby Mennonite sect. The book attributes Smyth’s restlessness to his commitment to the Bible: “His biblicism took him through many Protestant communities in a search for the fullest revelation available” (25). Smyth was undoubtedly a biblicist, but there are other explanations for his repudiation of his self-baptism. On occasion, the book suggests that biblicism leads to other negative results, which will disappoint conservative readers.

Other reviews have been mixed in their final appraisal of Leonard’s text, despite the unanimous acknowledgement that producing a one-volume Baptist history is a difficult task. As a potential course textbook, the work suffers from a lack of visual aids (a deficiency that equally applies to the competing volumes by Torbet and McBeth). Other complaints include the slightly negative treatment of more conservative Baptist traditions and the deliberately international focus of chapters 10–16. On the other hand, these two complaints illustrate and, to some degree, substantiate Leonard’s thesis that Baptists are a broadly differentiated sect. As a potential textbook for a course on Baptist history, I find Leonard’s text to be useful despite these perceived weaknesses. This is especially true for me as I teach the history of the Baptists outside of the United States of America. Although Leonard’s book should not be the only volume that students of the Baptists consult, I am convinced that it is a worthy member of the body of literature on the topic.