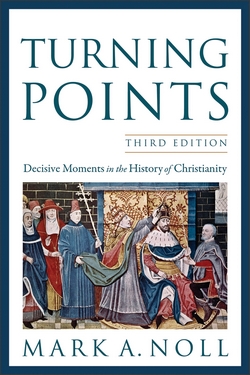 This book takes an unusual, and interesting, approach to telling the story of the church by focusing on key turning points throughout the church’s history. Noll describes this approach as “one of the most interesting ways to grasp a general sense of Christian history” (2). The process of identifying these turning points is necessarily subjective, yet he argues that it yields several advantages:

The turning points Noll chose can be seen in the table of contents, seen below. [N.B.: The numbers in parentheses for each chapter are dates, not page numbers.]

Introduction: The Idea of Turning Points and Reasons for Studying the History of Christianity

Afterword: The Character of Christianity and the Search for Turning Points

Noll emphasizes that “the fourteen turning points singled out for special attention … are by no means the only ones that could have been selected” (3). He explains that the process of selection itself is an important and useful exercise, and notes that “if the book inspires others to think about why the turning points found here are not as important as other possibilities, it will have been a successful book” (4). He then briefly outlines the structure of each chapter, noting that he always begins with “a relatively detailed account of the turning point itself” followed by more theoretical discussions of “why, how, and so what” (4). Additionally, each chapter features a hymn and a prayer from the general time period of the chapter as well as several longer quotations from people involved in the events of the chapter.

After explaining the structure and nature of the book, Noll takes up a larger question: why be concerned about church history at all? Noll offers several reasons why the study of church history is valuable.

In the introduction, Noll mentions a few of his own convictions which influence his portrayal of the events of church history. He generally prefers the term “history of Christianity” over “church history,” partly because he believes that “‘Christianity’ means something definite with boundaries that are fairly well defined by the major creeds.” Beyond that, Noll writes with “evangelical Protestant convictions” that “lead [him] to think that revitalized forms of Reformation faith are the truest and best forms of Christianity” (9–10). Noll qualifies this belief, however, with the observation that “historical study has convinced me that confessional Protestants have sometimes honored the ideals of the Reformation more in words than in reality. Historical study also shows that believers in other Christian traditions regularly display Christlike virtues and practice humble dependence upon God’s grace more than my confessional Protestant convictions tell me they should.” As a result, he has “tried to write with as much respect as possible for the widely diverse forms of Christianity that have been practiced with integrity, and continue to be practiced with integrity, in all parts of the Christian church” (10).

Of course, Noll’s statements regarding Catholicism reflect his perspective as an endorser of Evangelicals and Catholics Together in 1994. I think it is useful to read authors from outside my own tradition, but that does not obviate the need to read with discernment.

Noll’s book is helpful for a number of different reasons.

Although each chapter is interesting and carefully researched, it does become evident that some chapters play more to Noll’s strengths than others. From time to time, he indicates in a footnote that he is depending upon another secondary source for much of his material in a chapter. In other chapters where the subject material is within an area where he has done extensive research, he writes with considerably more freedom as he draws upon his own extensive knowledge. An example of one of his stronger chapters is chapter 10 on the Evangelical Revival under the Wesleys (his name appears twice in the “Further Reading” section at the end of the chapter), and an example of one of his weaker chapters is chapter 9 on the Jesuits. Still, his skills as a researcher shine throughout, and there is a remarkable uniformity of quality throughout.