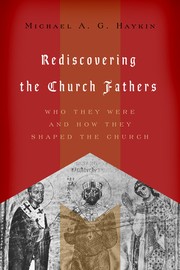 In this book, Haykin combines his remarkable knowledge of the earliest period of church with his zeal for heart-warming devotional Christianity to produce a work that both informs and edifies.

Haykin writes to counter the fact that, in his view, “far too many modern-day evangelicals are either ignorant of or quite uncomfortable with the church fathers” (13). In this regard, he observes, that “certain strains of anti-intellectual fundamentalism have discouraged an interest in that ‘far country’ of church history” (14, my emphasis). He understands that this problem is not entirely due to bad reasons, however, because our “desire to be ‘people of the Book’—an eminently worthy desire—has also led to a lack of interest in other students of Scripture from that earliest period of the church’s history after the apostolic era” (14). Despite this trend, Haykin argues that we should read the church fathers for several reasons. We should read them for “freedom and wisdom,” to understand the New Testament, because of bad press about them, to aid in defending the faith, and for spiritual nurture. In the book, Haykin’s goal is to spark our interest in reading more of the fathers “by looking at several case studies, as it were” (29). These case studies serve to introduce important themes in both the early history of the church and the development of cardinal doctrines. As such, this book is not a comprehensive survey of the fathers, a feature that is apparent by the fact that although there are chapters on many important fathers, some of the most important (like Athanasius and Augustine) are actually left out.

Appendix 1: Reading the Fathers: A Beginner’s Guide Appendix 2: Reflections on Jaroslav Pelikan, The Emergence of the Catholic Tradition (100–600)

I would like to share just a few comments on how some of these chapters impacted me, without going into a summary of each individual chapter or a discussion of major themes that build throughout the book.

Many (if not all) of these chapters nurtured me spiritually. One of Haykin’s many research interests is the study of Christian spirituality, a topic that is the focus of a festschrift in his honor titled The Pure Flame of Devotion: The History of Christian Spirituality (edited by Weaver and Clary). This emphasis shines throughout the book, but I was particularly encouraged by Ignatius’ steadfast anticipation of his own martyrdom and Patrick’s dogged commitment to evangelizing his former captors in western Ireland.

As I expected, many of the chapters deepened my appreciation for the precise formulations of orthodoxy that we enjoy as a result of the diligent efforts forged by these men in times of doctrinal controversy. The chapters on the Letter to Diognetus and Basil of Caesarea were especially helpful in that regard.

On another note, my understanding was transformed by his chapter on Origen. I did not realize it, but I had allowed bad press on the Fathers to distort my understanding of their abilities. I began reading the chapter assuming that Origen’s famous penchant for allegory would mean that there would be little for me to learn about biblical interpretation. But I realized that my understanding of Origen was tinted by a gross misunderstanding. Rather than reading about a half-crazed mystic who simply allowed his imagination to run wild whenever he encountered something he didn’t immediately understand in the biblical text, I learned that Origen was a deeply devoted student of Scripture who understood that allegorical interpretations were not always appropriate (81–82). In fact, Origen actually affirmed three uses for the literal meaning of Scripture, rather than seeing it all as a deeply spiritual parable of something other than what it actually says, and said that the interpreter “should not resort too easily” to allegory (84). Although Origen is perhaps the best-known implementer of the patristic penchant for allegory, he only employed it when he felt it was appropriate, and he articulated principles for the appropriate use of allegory (85–86). Coming away from this chapter, I realized that I have misunderstood the church fathers and their use of allegory because I had not been listening to them. Instead, I had been allowing my own bias (which came from bad press) to keep me from a fair analysis of the facts.