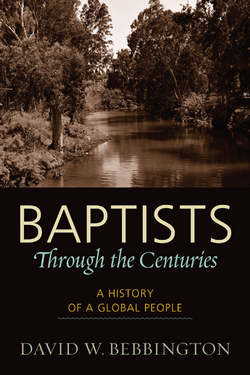 This book was runner-up in my textbook adoption process for my Baptist history course. I have not yet read this book in full, but I have found portions of this book to be helpful as I prepared lectures. I chose not to select this book as required course reading for two reasons:

a. Published as it is by Baylor University Press, it costs slightly more than Leonard. b. Bebbington follows a synthetic rather than chronological approach to the details of Baptist history. He describes the synthetic approach in the paragraph quoted below.

“It is primarily a work of synthesis that attempts to put the pieces of the puzzle into an intelligible framework. Its approach, therefore, is topical. In accordance with the maxim that it is better to study problems rather than periods, each chapter addresses an issue in Baptist history. … A second feature of the book is its effort to set the problems at hand in a wider context than Baptist history. Baptists did not exist alone, and so the analysis gives space to the broader influences—intellectual, social, and political—that played on religious developments. … The third aspect worth mentioning is the principle of organization. Countries are not kept apart, for that misrepresents the reality of the past. For all the contrasts between different nations, Baptists traveled between them, read each other’s writings, and corresponded across oceans. What happened in one part of the world was often duplicated elsewhere.” (pp. 4–5)

This approach is self-evident when you look at the chapter titles, listed below:

There is certainly plenty of merit for the use of a synthetic approach to historical study, and I’ve benefited immensely from reading other works that follow this approach (in fact, Turning Points by Noll is highly synchronic in some chapters). However, I don’t think a synthetic approach would work well for beginning students who had no general chronological framework into which to plug the disparate concepts a synthetic study would bring to the surface. However, for readers with a general familiarity with the Baptist story, Bebbington’s work may prove a refreshing approach. The synthetic approach is somewhat of a current trend in historiography, but I was encouraged to find that others share my relative antipathy towards it as a practice. For instance, John Aloisi (Assistant Professor of Historical Theology at Detroit Baptist Theological Seminary), gave the following recommendation for this book on his blog:

This book is a very interesting read…. Although described by the publisher as “a chronological survey” (back cover), Bebbington’s work is largely arranged in a topical format that can be be helpful though it also has the potential to be a bit disorienting at times. For example, I found it rather odd to read about William Carey almost 100 pages after Walter Rauschenbusch when Carey was born exactly 100 years before Rauschenbusch. Similarly, the book includes a chapter titled “Women in Baptist Life” (ch. 10). I wondered, why not just discuss key Baptist women at appropriate points in the historical narrative (e.g., in the first nine chapters)? I don’t see a compelling reason for making that topic a distinct chapter. A similar observation could be made about the chapter on religious liberty (ch. 12). On the other hand, if one wants to read an insightful chapter on these topics or on things like Baptists and the social gospel (ch. 8) or Baptists and race relations (ch. 9), Bebbington is a very good place to turn. Overall, Bebbington’s work is definitely helpful and well worth reading, but the potential reader should realize that Bebbington doesn’t tell the story of Baptist history in anything like a chronological narrative. So I’m recommending it with the caveat that if you like to read history in a generally chronological format, Bebbington may drive you crazy. But if you want to read about some key topics in Baptist history, this is a helpful book by a first rate historian.

So anyway, if you’re glazed over with all this rambling about historiography, let me just bring this back to a point of usefulness by sharing Bebbington’s own statements summing up the overall point of the book:

“This book attempts to address the question of who Baptists have been over the four centuries of their existence. It tries to take account of ways in which they adapted to the societies in which they lived as well as their central practices. … [I]t must not be assumed that Baptists possessed a single, consistent identity. There were, after all, many types of Baptists. … The variety of Christian bodies called ‘Baptist’ has to be taken into account. So does the consideration that there was great deal of change over time. The circumstances of the early seventeenth century, when Baptists first arose, were very different from those of the early twenty-first century. It was a hallmark of the denomination to be strongly attached to the Bible, but ways of understanding the place of scripture in ordering church life altered over the centuries. Again there was much variation over space.” (p. 2)

“The coverage of this book extends not just over England in the period from 1609 to the present but also over the world at large. … There is, therefore, a need for Baptist history to have an international dimension. Because research on many countries (including some of the nations just mentioned) is at a very preliminary stage, there are all too many gaps in the coverage of the present volume. The aim here is not to deal with every country where Baptists have existed, but to discuss broad trends with representative instances.” (pp. 3-4)