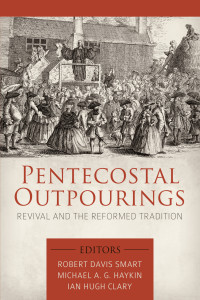 Nearly all Christians say that they desire “true revival,” but few agree on what that phrase means. Evangelicals sometimes distinguish between “revival” and “reformation,” associating the former with individual spiritual renewal (usually through mass conversions) and the latter with outward societal change. Furthermore, many evangelicals will contrast “true (or genuine) revival” with “false revival.” Iain Murray captures this contrast in his well-known work entitled Revival and Revivalism. What is it that distinguishes between true revival and the excesses of revivalism? Should Christians pray for revival? How should they seek it, and what should they expect when it comes?

These questions are particularly vexing for those within the Reformed tradition. Pentecostal Outpourings: Revival and the Reformed Tradition brings together a coterie of Reformed historians to argue that true revival is not merely compatible with Calvinistic theology, but that historical revivals have been heavily influenced by Reformed preaching and represents a consistent understanding of the true gospel. Despite the real and lasting results of these revivals, the historical record is difficult to interpret because true revivals have often included mixed reports of unnerving enthusiasm or manipulative revivalistic tactics. Parsing these confusing elements requires a foundational understanding of true revival, defined as follows by Robert Davis Smart in the introduction:

Pentecostal Outpourings demonstrates that revival is a sovereign gift from God in which, for a special season, His normal and true work of advancing His kingdom is sped up or quickened so that more is accomplished through His servants in a shorter period of time. Revivals cannot be merited by us but have been secured by another—Jesus Christ. Jesus tells His disciples that His righteous life and atoning death won for us “the promise of My Father” (Luke 24:49; Acts 1:4). When Jesus ascended to the Father and sat down at the right hand of God, He poured out His Holy Spirit at Pentecost. This once-for-all historical and redemptive event was not the last time Christ poured out His Spirit in redemptive history. Subsequent outpourings of the Holy Spirit, working by and with the Word, are reviewed in this volume in order that we may seek God earnestly to revive His church once again soon.

Each chapter in Pentecostal Outpourings focuses on the history of revivals within a particular area and denominational tradition and is written by a specialist. As a result, the chapters provide detailed and reliable historical scholarship tracing the impact of revivals, usually beginning with the “Evangelical Revival” or “Great Awakening” and carrying forward through twentieth century. In some cases, chapters conclude with an extended theological analysis of the historical events (e.g., the chapter by Eifon Evans on the Welsh Calvinistic Methodists). Each well-written chapter includes numerous historical examples from individual conversion narratives, the writings of revival preachers, and contemporary historical records. A few of these memorable stories include the remarkable revival stirred by the harsh preaching of “crazy James Glendinning” in Ireland, the eventual misappropriation of Jonathan Edwards’s revival apologetic by later revivalists, and Andrew Fuller’s growth out of hyper-Calvinism to the zealously evangelistic Calvinism that eventually led to William Carey’s missionary endeavors. Of course, these are but a few highlights, and the time would fail me to tell you about the countless ordinary believers who came to lasting faith in Christ through the revival preaching that is recounted in this volume. To fully appreciate these revival stories, you just have to read the book.

Many similarities stand out in these accounts of revivals which took place in vastly different locations, among divergent denominational traditions, and at different times. It is immediately obvious that true revival is no respecter of denominations. It occurs, often without warning or harbinger, wherever and whenever God pleases according to His sovereign plan. Genuine and lasting revival cannot be manufactured, yet many times it does occur amongst people who have earnestly prayed for it. Unfortunately, it can be difficult to distinguish between true revival and excessive emotional enthusiasm, which many times occur simultaneously. Careful pastors who are aware of this repeatedly seek to steer their people towards the Scriptures in an effort to curb excesses.

Those who read this book will be forced to reflect on their own relationship to God’s providential work. Evangelical Christians will come away from this work with a renewed longing for genuine revival, resulting in earnest prayer and renewed passion for faithful preaching and teaching of the Bible. But I suspect that even readers who are not evangelicals may be drawn to this volume, perhaps curious about evangelical claims of divine intervention. Although this book alone won’t be sufficient to overcome agnostic doubts, such readers will find such striking similarities in the genuine revival accounts that they may be driven further in a search to evaluate the claims of the Christian gospel itself.

Pentecostal Outpourings is available for purchase from Amazon and CBD. Purchasing a copy using one of these links below will earn me a small affiliate commission:

I. Revival in the British Isles